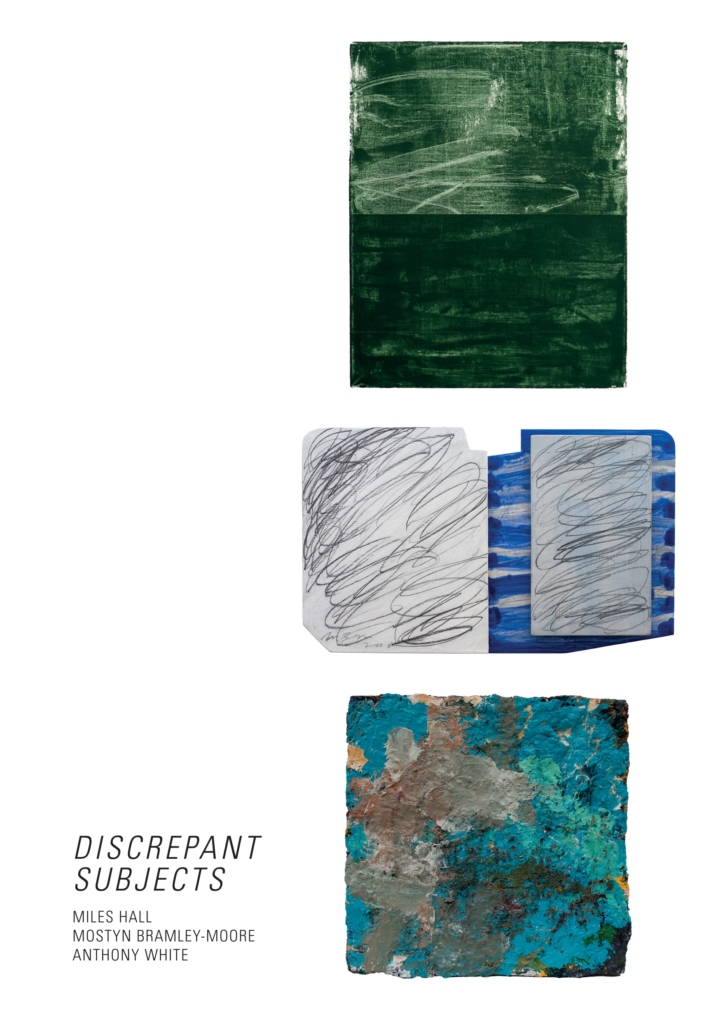 This exhibition features three Antipodean painters-Miles Hall, Mostyn Bramley Moore and Anthony White.  This three person exhibition presented at Le Pave D’Orsay focuses on the generational breadth and ongoing influence of gestural painting in contemporary practice. Three painters acknowledging through distinct individual approaches of action and process based painting, the weight of the history of abstraction and their ongoing contributions to gestural painting in the contemporary artworld.

The time for reappraisal of the gestural impulse is now appropriate as to use adjectives such as materiality,spontaneous,textural,gestural or expressive would be simplifying or outright denying the nuance,emotional depth and intellectual rigour of our each subjective experience. In today’s world there is a conflict of subjectivities which is now culturally relevant. There is a need for a linking between social and cultural subjectivities.

These three artists bound by common nationality, experiment through a mixture of instinct and intellectual rigour to produce different aesthetic results broadly defined by action painting and gestural painting. The recent modern history of gestural painting has been watered down by meaningless fashionable art and the point of the show would be to reassess the validity of a gestural form of painting as again an authentic mode of expression counter to the banal expressions of recent history.

Painting is an extraordinary process that enables new territories to appear, disappear and to be found again.  Living on the edge of the Mediterranean sea, these paintings find their inspiration in a textured mix of landscape, history and human endeavour.  The title of this series Open Ground is as much a reference to the ground specific to painting as it is to the physical environment that surrounds me.  The ground in painting refers to the surface on which one paints – like the terrain of the Mediterranean, a painting is the result of a sustained engagement of action and determination over matter.

Montpellier based Miles Hall has held solo exhibitions in Sydney, Brisbane, Paris and Krakow. He holds a Doctor of Philosophy from the Queensland College of Art, Griffith University (2010), a Diplôme National Supérieur d’Expression Plastique (DNSEP) Ecole Supérieure des Beaux-Arts, Montpellier, France (2005), a Bachelor of Fine Art (Painting Major) from the Queensland College of Art, Griffith University (1997) and a Diploma of Fine Art (Painting and Drawing) from the The Julian Ashton Art School, Sydney (1995) where he was the recipient of the John Olsen Scholarship. He is currently a lecturer in Painting and Drawing at l’Ecole Supérieure des Beaux Arts, Montpellier ESBAMA.

Mostyn Bramley-Moore’s recent paintings have explored the ways in which “abstract“ paintings can carry narratives, messages, commentary about geographical, temporal and personal location, and symbolic, vestigial imagery. In his paintings there is a deliberate prevarication between coherent and incoherent communication, and although he is often described as an abstract painter he personally sees himself more as a “narrative” or “literary” artist.

Bramley-Moore studied in Sydney and New York. After completing his Master of Fine Arts in painting at Pratt Institute he was awarded a residency at the Cité International des Arts in Paris. Subsequently, he taught in Australian art schools and completed a series of international residencies, most recently at Camberwell College of the Arts in London and the Valand Academy, University of Gothenburg. In 2018 his exhibition Histoires Fantômes was presented by the American University in Paris.

Currently, Bramley-Moore lives and works in Australia on the coastal fringe of Brisbane and on a rural property on the tablelands of Northern New South Wales.

White’s painting practice is exploring the intersection of historical and current social issues and how they relate to the production of contemporary images. His practice is a sustained enquiry into the relationship between Modernism and colonialist concepts of empire. In doing so, he asserts the role of the artist as inherently political and urges us to consider the role of artistic interventions in the current climate.

White’s works are often characterised by an acute awareness of surface and a preoccupation with the engagement of physicality and the found object. He was the recipient of the two year travelling scholarship the Marten Bequest during 2007. He has also received international prizes and residency programmes in Paris, Leipzig,Vermont and Latvia in art centres and museum contexts.

During 2017 he was selected to participate in a painting symposium at The Mark Rothko Centre and subsequently the museum acquired two of his works for their permanent collection.

He has been commissioned to make new works and acquired in both public and private collections internationally including the Soho House Art Collection in London and The Tweed Regional Gallery Tweed Heads, Australia.