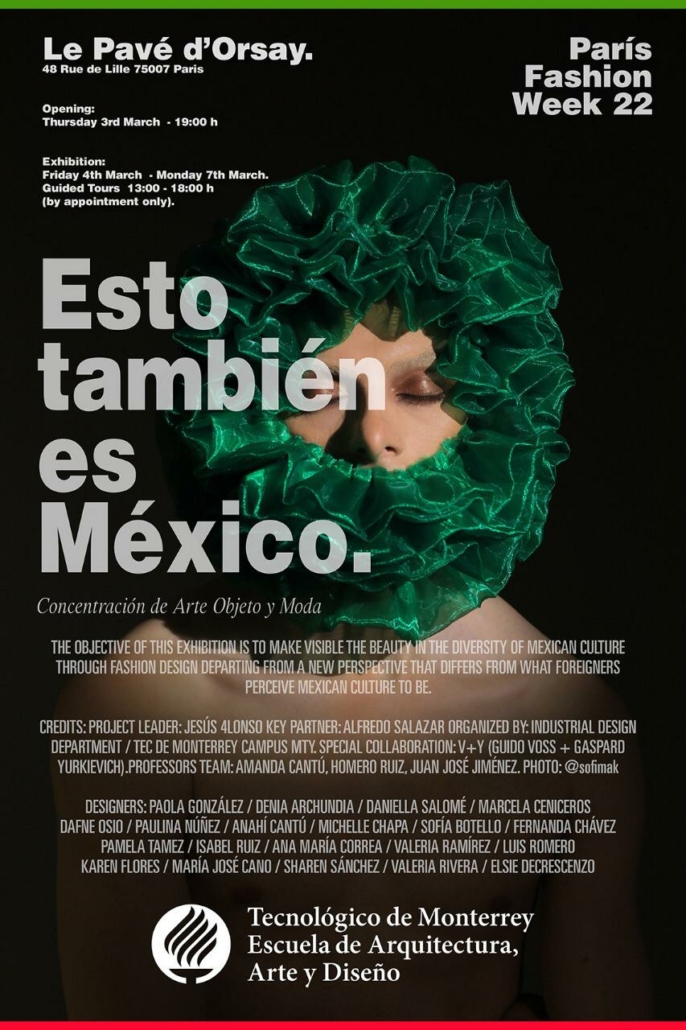 The Department of Design and Architecture of Tecnológico de Monterrey, Campus Mty announces the participation by the Art Object and Fashion concentration in the city of Paris, France, during Fashion Week, the first week of March 2022. Led by professor and designer Jesús 4lonso and his team: Amanda Cantú, Homero Ruíz, Juan José Jiménez and Wesley Pérez.

The objective of this exhibition is to make visible the beauty in the diversity of Mexican culture through Fashion Design, from a new perspective that differs from the common perception of Mexican culture, viewed from abroad. This project includes a series of outfits made with materials and processes developed within the city, with the support of local suppliers, using artisanal and digital textile expressions and materials such as leather, metals, and natural fibers, to name a few. The exhibition also includes a series of photographs taken by the students during the semester to embrace the individual celebration of each member of the program.

The Designers of the Object Art and Fashion concentration at Tec de Monterrey 2021 took on the task of addressing different conceptual and aesthetic routes according to the following concepts:

During the design process we had the honor of having special participation from the designers of the V+Y brand / Guido Voss and Gaspard Yurkievich, who with their experience provided valuable criticism and suggested creative routes to consolidate the project.

It should be noted that this is the first time that a Mexican university has ever participated in the circuit held at the Capital of Fashion in which the outstanding Mexican Photographer Alfredo Salazar has help us in great ways and has overseen the coordination and specifics of the exhibition to be held at Le Pavé d’Orsay on March 3rd at 7 pm.

With this initiative, the University opens the relationship with the PFW for later generations and gives the country a success in its intention to appear as a creative leader in Latin America.